I've ended up rebuilding the Guardian Sphinx model using the texture layout sheet found on the sentient forums. I know frontal textures are correct, however regarding back and side textures, I know they are incorrect as there are no references available.
Will try a few other configurations for the side texture layout. (if push comes to shove , I may also have to make some custom textures) 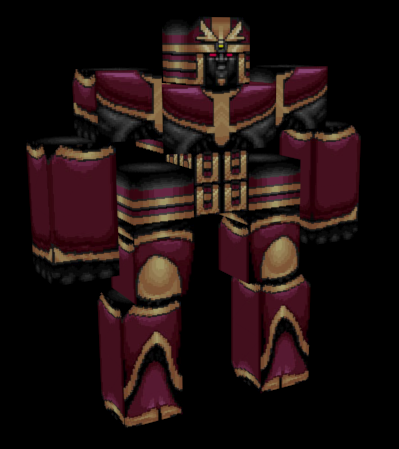 Man this guy does not look like he would be as big as shown in the concept. If it were, than I would imagine the textures would be very very pixelated.
Perhaps he was more or less a mini version of the boss found wondering around the levels? ( the cubes he is made out of could be the same size as the level cubes)
Hmm.....than again this is 1996 we are talking about. (Also note: Crap I just caught this,,,,,,the name is Egyptian Sentry and not Guardian Sphinx) 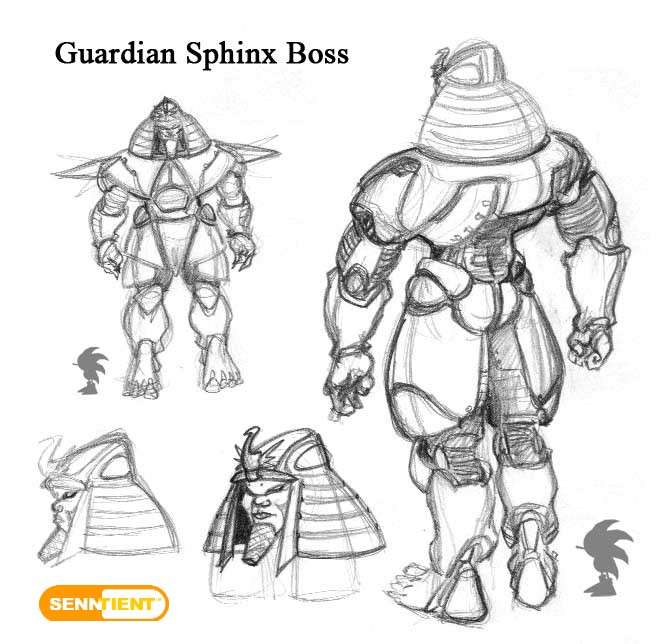 Hey guys !
Looking for someone who could shine some light on post # 52 here: http://spriters-resource.com/community/ … amp;page=4
If anyone has any info please let me know.  I've already attempted to contact the author of the post.

*Quote #52* "On a side note, the Guardian Sphinx boss has been ripped by X-CulT."

I think what he meant was the textures as I'm not finding a model anywhere. We could always make one ourselves.

a few things come to mind

it does say Egyptian Sentry as you noted

sen·try
A soldier stationed to keep guard or to control access to a place.

final review i think that this would work good as the Guardian Spinx but i think a new helmet and sholder-pads, and perhaps some form of tunic should be enough to change the Egyptian Sentry's into the Guardian Spinx

i do love how it turned out

spriting the attack i figured he'd have

Want to say that I may just model a new GS from scratch following the official concept art.
But yeah these are great ideas.
If you do side and back textures, It would save time on my end in doing them for the sentry.

We'll also need some sort of texture for the joints.

Hi andrew75, there were 2 distinctly different characters... the Guardian Sphinx Boss and the Egyptian Sentry... not the same.

No thoughts for the latter, as it was really a test to see whether I could make a character with textured blocks...

But as to the Guardian Sphinx... he was supposed to be almost completely hidden by the sand, half his face above it... and Sonic and friends would trigger it awakening... as it rising up with massive sandfalls erupting out of its ancient armor, the Guardian Sphinx (which wasn't even a sphinx =P)... stared at the team... as Sonic runs up the body of it... and it would smash itself trying to hit the team...  The music I composed really made this vision come to life for me.

Yeah it does for sure. check my reply to Kurisu.

So your saying(In reply to your edits), that your working about the wrong boss?
And what's the senntient forums, and why do they seem to have a lot about Sonic Xtreme?
Speaking of which, are those official textures?

Senntient is the homepage of Chris Senn (Kurisu) He's a member of the original sonic Xtreme development team. there are a lot of resources there as well as a history and FAQs for the game.
Yes they are official textures, but were never meant for the final game.
I think I posted the incorrect link above, oops... anyways its fixed now

here it again is just in case: http://www.senntient.com/forums/viewtopic.php?id=1955