My first idea- it could be applied to most levels.

He will follow you quickly on the ground, perhaps an insect robot- and you must flee, and find a spot where you can rotate the level. The robot, unlike Sonic, will not stick to the ground, and so it will fall on its back. This is your chance to attack. He will then flip over and proceed to attack.

This is a chase boss fight, and there will be ramps and curves that you must navigate around, not to mention the lasers Eggman will attempt to fry you with. In order to attack Eggman, you have to dodge all of what he throws at you for long enough until you can fly off a ramp and hit him. Yes there will be holes in the ground towards the end, as he becomes desperate to annhilate Sonic.

Something similiar to the Sonic Adventure Chaos fight where you had to jump from one platform to another (after the Knuckles fight). It could be an arena fight, but after 2-3 seconds, each platform would fall. Near the end of the boss, there would be fewer platforms and the boss in the middle would shoot more stuff at you.
I could totally imagine this as a JG zone boss. It's simple, yet makes a perfect 1st boss.

Your second idea was actual one of our ideas too.  Can't say much more then that otherwise it wouldn't be as epic as we planned.

That would be CHAOS 4.

I imagine the Sphinx to work similarly to the Biolizard actually, at least when it comes to the size. He could swipe at you with his paws, roar at you, send out shock waves, and to attack it you should climb on its back.

Yes, Chaos 4.
synchronizer: that is a good idea.

how about a boss that is similar to the fight in sonic 3d blast  it would be cool.

I find that boss kind of boring to be honest. You guys should check out some of the boss concepts and descriptions on the X-treme Compendium. I remember one where toxic waste rose and you had to beat the boss as it rose, like vertical platforming plus a boss fight. 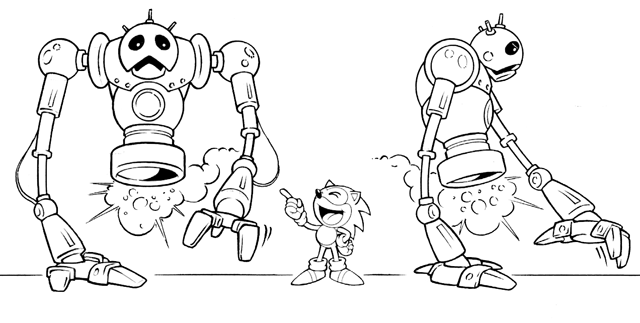 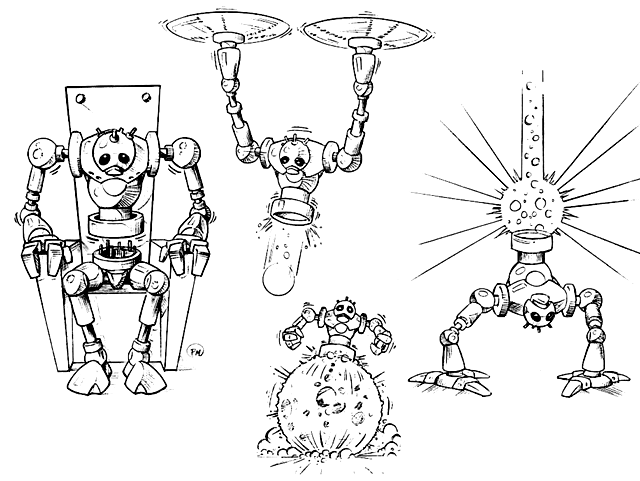 We really didn't like that boss because it doesnt look like it fit into the sonic universe too well.

My ideas would be more along the lines of Robotnik-piloted machines (like the main bosses from to S3&K). The concepts are the important part, and if used it would be easy to design an enemy other than Eggman to carry out the fight.

Egg Driver
My first idea is a platformer boss. The camera would be stuck on Eggman so you're always facing towards him. He flies up high and shoots down spikes at Sonic. Sonic dodges them and they plant into the ground leaving their dull sides exposed. Each spike is longer than the last one. Finally, when none are left Eggman (with a giant spike on the bottom of the machine) rams down at a final attempt to hit Sonic. After dodging, Sonic jumps up the spikes (from shortest to longest obviously) until he can reach and attack Eggman. After being hit, the spikes either all gather from the ground and re-attach to the Egg Driver, or (if used in the Crystal Frost, which the spikes would be made of ice) shatter and new ones would form on the Egg Driver
Increased Difficulty (pick and choose): Spikes stay down for shorter periods of time, Eggman gains a close range attack once planted, spikes launch from the ground shortly after being stepped on, etc.

Egg Incinerator
This is a chase boss. Think of it as a combination of a chasing boss (Like Eggman in the Metal Sonic fight in SCD) with the 2nd boss of Sonic The Hedgehog (16-bit, Marble Zone) where you're running from him and he's lighting the floor behind you on fire constantly. The camera is behind Sonic facing forward (away from the boss). You run on a wide path staying ahead of the boss. At certain intervals, an elevated path will appear on one side of the track. Steering toward and jumping onto the path puts you underneath the track (upside-down) but the fire is still a hazard. Another path similar will show up, successfully getting on it puts you on the offense by getting above the boss for a hit. Missing the second path forces you onto the top-side of the track again.
Increased Difficulty (pick and choose): The boss starts using projectiles during the fight in attempt to force Sonic to steer from the elevated pathways, gains a large projectile that automatically hits should Sonic fail to reach the elevated pathway on time, etc.

EDIT:
I'm redoing these concepts into bosses shown in the Yasuhara Hirokazu sketches for the levels. I've already finished adapting the Egg Incinerator into a Dragon Boss and now will continue working on concepts.
If possible, there could be a gauntlet boss at the end where Robotnik sets up fights similar to the bosses fought throughout the game (similar to Sonic 4 E1). Dragon II (in the concept for Candy Mountain) could probably fit with the Driver concept.
Edit (again?):
I just realized my Incinerator is very similar to synchronizer's second concept. This was completely unintentional.

I have ideas for mini bosses that you would fight in the first acts of the levels.

Jade Gully - A giant mechanical gorilla that attacks by creating shock waves caused by pounding on the ground with his fists and throwing coconuts at you if you are too far away. Eventually, the gorilla would get tired, and Sonic would attack the gorilla by hitting it on the head. You clear it after 4 hits.

Red Sands - A mutated scorpion that is covered in venom, making it invulnerable to normal attacks. Can spit fire at you that follows you for about 10 seconds and hits you with it's tail if you are too close to it. To attack it, you need to find a rotating wall. When you rotate, the scorpion would fall on it's back and you can attack it by jumping on it's belly. You clear it after 5 hits.

That's all I can think of. I'll think of some more.

You know what they say...

All toasters toast bread, not toast!

I think that for one of the bosses you should include nack the weasel "That was actually going to be a boss in the game" From what I think I think you should rip the nack model from sonic fighters because from the only screenshot we could see it looks like the one the most on the game or maybe you guys can create a model and render it into a sonic xtreme 2d/3d style sprite sheet. Anyways for the attacks I think nack should use his gun to shoot the pellets out of and sonic can deflect them back by using his spindash and hurt nack but only when hes off guard Some other attacks could be using his long tail to smack sonic and sonic could somehow make use of the "Spin slash" attack in that boss.

Well I hope you like my ideas because they could help rebuild history!.

I was thinking it might be interesting to have Nack (or Fang, what have you) as a mini-boss of sorts, recurring or not. Take SA1, for instance. When you fought other characters who are more are less part of a recurring Sonic cast, there was a mini-boss-ish mode to them (Sonic/Tails Vs. Knuckles, E-102 Gamma, etc.) I'm not saying "make a new boss engine." I'm just suggesting an artistic liberty may be taken and inserting Nack/Fang into some room here and there for a little boss fight where you use a number of acrobatics to avoid his gunfire and melee attacks and best him.

no matter what fang must be in the game and use his tail as a spring a trie to squash you.

I think a move where he throws his hat at you like a boomerang would be plain funny.

Any idea what this is supposed to be?

Any idea what this is supposed to be?