found planet/moon whatever in the background of the death egg

These are not really in the background, they are scattered around the level at various places. In game they look more like orbs of energy or something.

I saw them too. Bear resemblance to something out of the Star Trek TNG Pilot. Maybe Kurisu would know why they were placed in.

Try asking him over on his forums, I'm sure he would be happy to answer any questions we have.
I'd ask, but I don't want to bother him to much, since I've already asked a ton of questions.

if your scratching your head thinking jade gullys moon!? alot of people think the moon is in the background of metal sonics 1st stage but its actually a whole planet and you are the one thats on the moon mind blown right ?

I don't think a gully could make up a whole planet, so I'm pretty sure Jade Gully is in Mobius.

Why do you feel the need to just randomly make stuff up? Stop making fan fiction and passing it off as fact. Next thing you'll know we'll have another "NiGHTS Engine" myth.

This is part of the last Sonic Xtreme storyline.

After Robotnik's defeat at the Floating Island, things returned to normal for Sonic and his friends. Robotnik however, had not been idle, and returned with an even grander scheme to conquer the world.

Robotnik has rebuilt his Death Egg fortress, larger than Sonic's entire world! So powerful is its gravity that it can rip planets from their orbits. Already several planets orbited the huge fortress, and Robotnik would not rest until Sonic's world was in his clutches as well!

But as Sonic was teleporting, one of the small planets surrounding the Death Egg changed course and intercepted Sonic! Sonic found himself on a strange world, surrounded by Badnik robots! Already the inhabitants of this world had been captured and changed into his evil minions. Robotnik had prepared a cunning trap, and Sonic had walked right into it.

Everything had gone as Robotnik had planned. He knew that Sonic would try to get to his new Death Egg, and had changed the creatures called Mips into Badniks. Then by controlling the planet's orbit, he had led Sonic right into his trap!

Sonic must free the captive Mips, make his way to the new Death Egg, and destroy it quickly. If he fails, the world will belong to Robotnik forever! 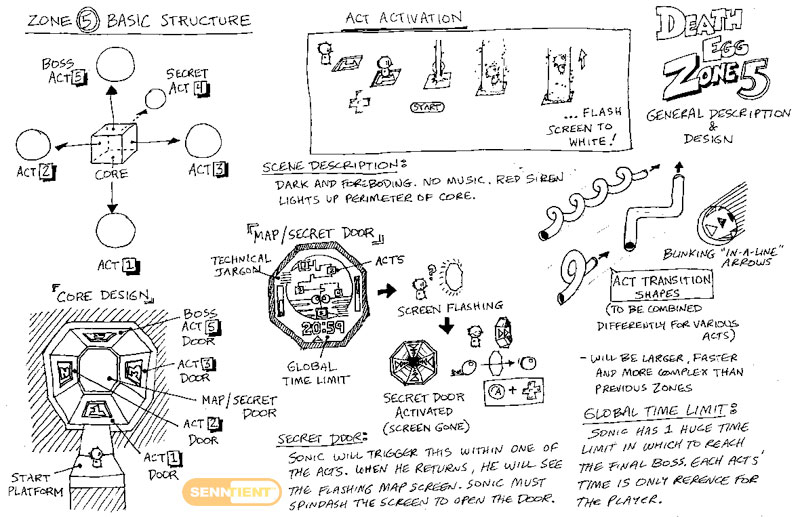 hey great news i have the 718 diamond  object

Proud owner of The Sonic-Xtreme Discord.

thoes objects in the arena are very similar to the "cone" objects in the saturn sdk. its more likly it is infact thoes objects. im guessing the crystals would spike up when the boss is entering or attacking. then open for a chance for sonic to use them to launch him into the boss

the spikes I think are bombs, the Crystals I think are just that. The middle Crystal I would presume to be a chaos emerald. I think Andrew said he got inside information on these boss levels.

The middle crystal looks more like a Sol Emerald or a Time Stone than anything.
Then again, I may be wrong here. Please correct me.

if your scratching your head thinking jade gullys moon!? alot of people think the moon is in the background of metal sonics 1st stage but its actually a whole planet and you are the one thats on the moon mind blown right ?

I don't think a gully could make up a whole planet, so I'm pretty sure Jade Gully is in Mobius.

Well actually, in the "Sonic PC" story (the story before the "Sonic X-Treme" one), it actually says "the Jade Gully jungle planet", so Jade Gully would've most likely been on another planet. And then again, in the story, Robotnik enslaved the rest of the Mobian solar system (leaving Mobius the only planet away from his grasp), so Techdiff could be kinda right here.